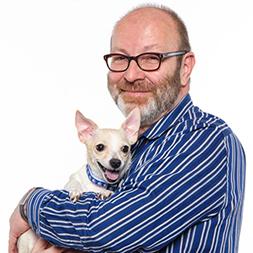 David Dinger is the Vice President of Operations where he oversees clinic and shelter services, facilities, and community programs.

David is a native Pennsylvanian and graduate of The Pennsylvania State University with a degree in Archaeology. In Chicago he pursued a number of opportunities but also began volunteering at The Anti-Cruelty Society in 1982 which is where he developed a passion for animal welfare, He joined the Society’s staff in mid 1982 and has held positions in all animal care departments. He obtained a certificate in Not-For-Profit Business Management from the University of Illinois in 1995. In his current role as Vice President of Operations for the Society, David has been instrumental in designing upgrades and leading the animal care shelter and the Society’s high volume spay/neuter clinic. He has made a priority of increasing cooperation and mutual assistance among animal welfare agencies in Chicago to achieve our common goals.