Exclusive behind the scenes photos and videos

When two-month-old Emmylou arrived at Chicago’s oldest animal welfare organization as a spunky four-and-a-half-pound puppy, The Anti-Cruelty Society knew she had the potential to do big things. Within a few weeks, this tiny brown and white pup was selected from thousands of adorable, adoptable puppies from animal shelters across the U.S. to compete in this year’s Puppy Bowl.

On Sunday, February 13 at 1 p.m. CST, Anti-Cruelty Society alum Emmylou gets the opportunity to show off her charming personality and technical skills during Animal Planet’s Puppy Bowl. As a member of Team Ruff, Emmylou shows off her nimble offensive and defensive skills, and even manages to get a foul for losing her uniform, a bright orange bandanna, during the game.

Soon after she made her grand entrance, Emmylou won not only the hearts of the entire staff, but also the love of The Anti-Cruelty Society’s CEO Tracy Elliott. Earlier in the year he adopted a puppy named Molly from the Society. He decided to foster Emmylou not only to give her a loving temporary home until she found her forever family, but as a playmate for Molly. As it turns out Elliott (and Molly) decided to adopt Emmylou and make her part of their pack. Elliot, Emmylou and Molly plan to watch Emmylou’s big debut in Puppy Bowl at his sister’s house on Sunday.

“We’re excited to see Emmylou on the big screen, but we also love that the Puppy Bowl showcases shelter puppies of all shapes and sizes to encourage adoption,” said Elliott. Many folks don’t realize that The Anti-Cruelty Society and other shelters have amazing puppies and dogs that have been surrendered through no fault of their own that are desperately waiting to find loving homes.” 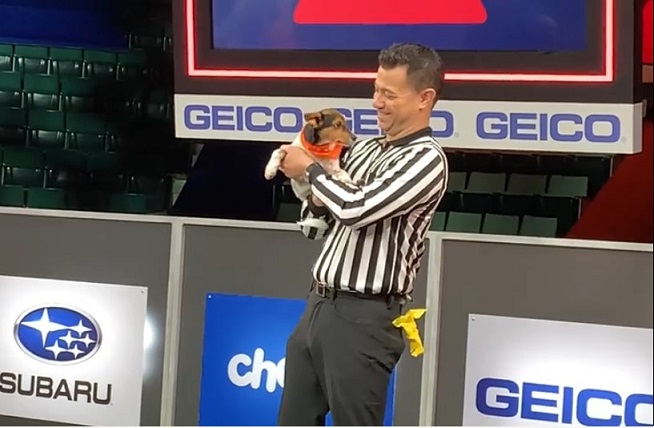